Welcome to the homepage of SinSonic. Here you will find news, information, videos, music and other in regards to his music! 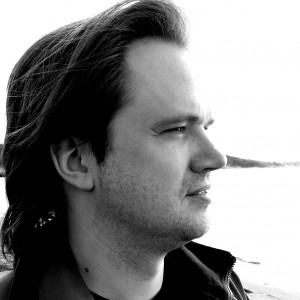 Jonas Lindahl is his name.
Have been in to music all his life. Loved playing drums and piano as a kid. When he was about ten, he started using his fathers 4-track tape recorder, a Casio CZ-1000 and Roland drum machine. It was mostly some kind of disco/techno style of music in those days. 1991 he got his first computer, an Amiga 500 and later on his “Dream Machine” Amiga 1200. Suddenly it was possible to track music in Octa-MED and Dynamic Drums. OctaMED was the tracker he enjoyed the most. Tried a few others too, Dynamic Drums, was more like a 8 track drum machine. Was real fun making cool rhythms.

About 1995 when Bill Gates took over the world, he decided to try PC-Tracking. 4-8 channels was not enough anymore. His choice was MODPlugTracker. It was most similar to OctaMED, and had support for the new 64 channel Impuse-Tracker format, and later on you could even add sound effects (VST) to lift it up even more. He started a tracker group with a friend (Seko/Secoone) back in 1998 called Liquid Beats, and released a few tracks on the tracker scene.

The same year he bought a neat soundcard (TerraTec EWS64) with the ability to load any sample and play it, as MIDI . 3 years later he invested in his first synth. As he wanted to increase his possibilities in making his own sound. His choice was, Roland XV-3080 and two expansions boards, to get more neat drums and synths. Encouraged by the response from people, he decided to try the Virus C. You can be sure it's a mean machine for trance and the techno style of music. With these two babies, he made several tracks.

The choice of artist name:
In the beginning he called him self JPL, but soon he realized that it wasn't such a grate artist name. If you Google for “JPL” you would most likely end up at NASA looking at their rockets. he started thinking about a better name, and one day when he was doing his mathematic, with angles and so on, he realised that Sin (as in Sinus) and Sonic in combination would work just fine. Since he mostly do trance, Sinus was a good figure for his analogue sound. That's it … SinSonic.

SinSonic is flexible when it comes to producing music, although trance has been one of the preferred favorite for styles of music.
Tracks been played by dj:s such as M.I.K.E Push, Ferry Corsten, Giuseppe Ottaviani, Stoneface & Terminal and Cold Blue.

"Far away" one of the seventeen honorable finalist in the International Songwriting Competition 2015.

"Project Fire" one of the seventeen honorable finalist in the International Songwriting Competition 2014.